Amid Rising Adoption, Funding for Blockchain Startups Dries Up Blockchain has become a buzzword in the startup ecosystem and multinationals alike. Numerous benefits provided by the technology has incentivized businesses and governments to adopt, explore or invest in it.

However, a surprising turn of events took place in 2019 when it comes to the amount invested into blockchain technology and companies behind them. After the incoming funds peaked in 2018 with $5.5 billion in capital raised, this year saw a sharp decline — with less than $3 billion of capital flowing into the ecosystem. 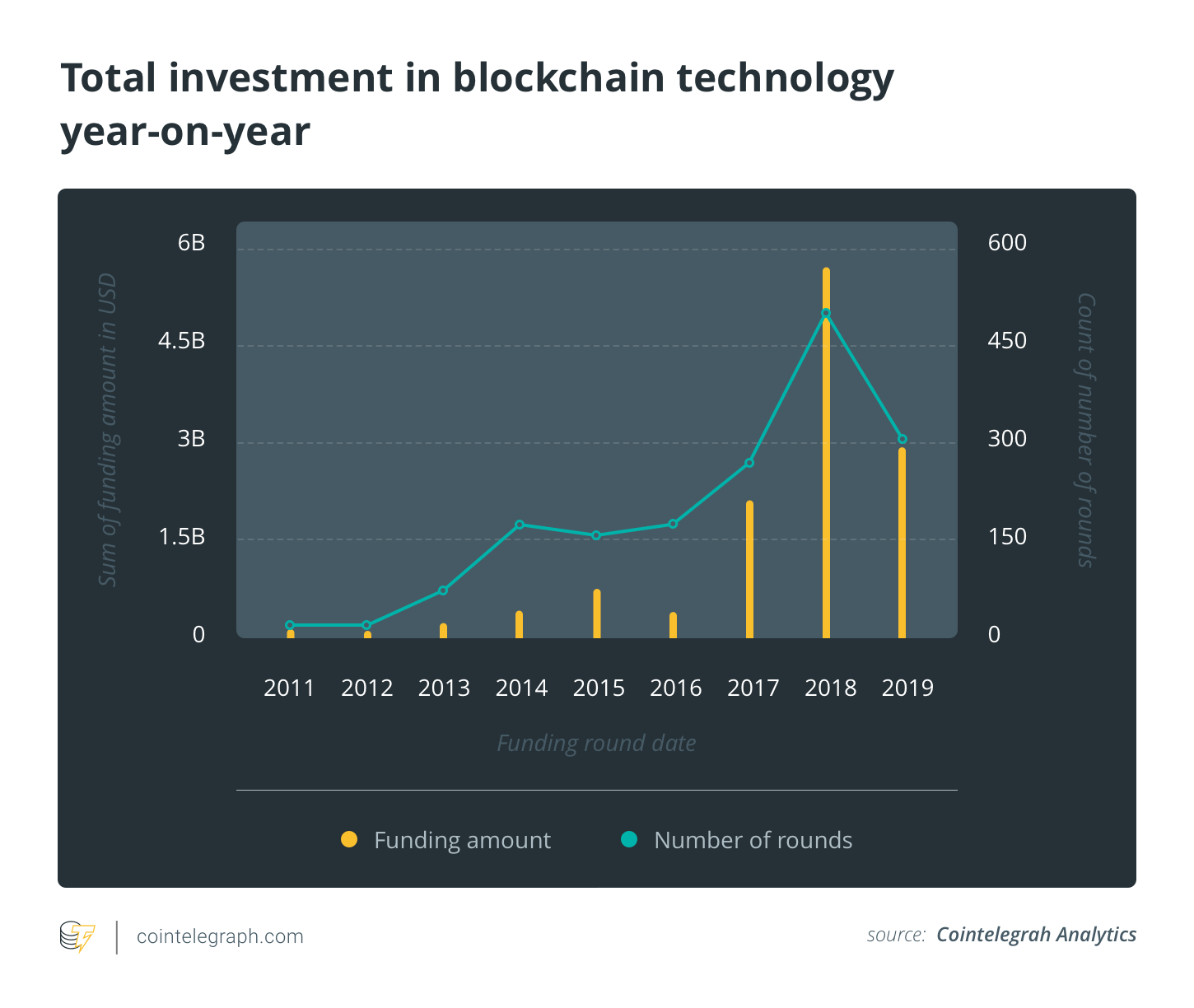 There are numerous reasons to explain this, however. The bullish hysteria around Bitcoin was over with the value of Bitcoin falling from an all-time high of around $20,000 to a low of $3,100.

Another explanation could be that initial coin offerings lost their charm. There were other external factors, such as the overall decline in funding of the fintech sector, that led to decreasing funds for blockchain companies as well.

2017 was the year when ICOs really began to take off. The majority of funding raised by blockchain companies came through ICOs. Bancor protocol’s innovative token sale of $153 million set a standard for a new generation. 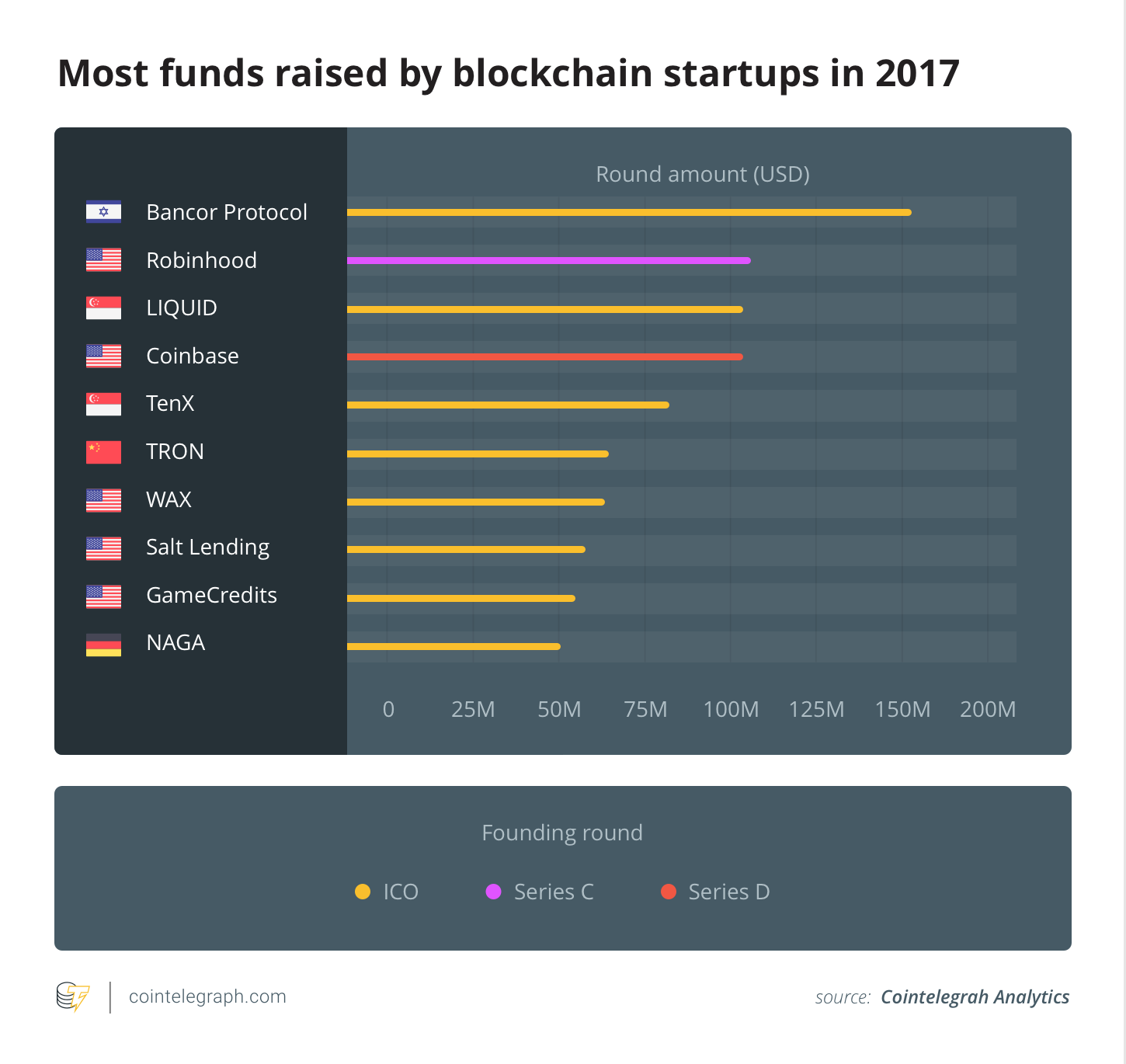 Tron also completed its ICO in 2017, propelling it to swiftly become one of the most recognized altcoins. The ICO became a worldwide phenomenon, as huge token sales were taking place in Israel, Singapore, China, the United States, Germany and more. 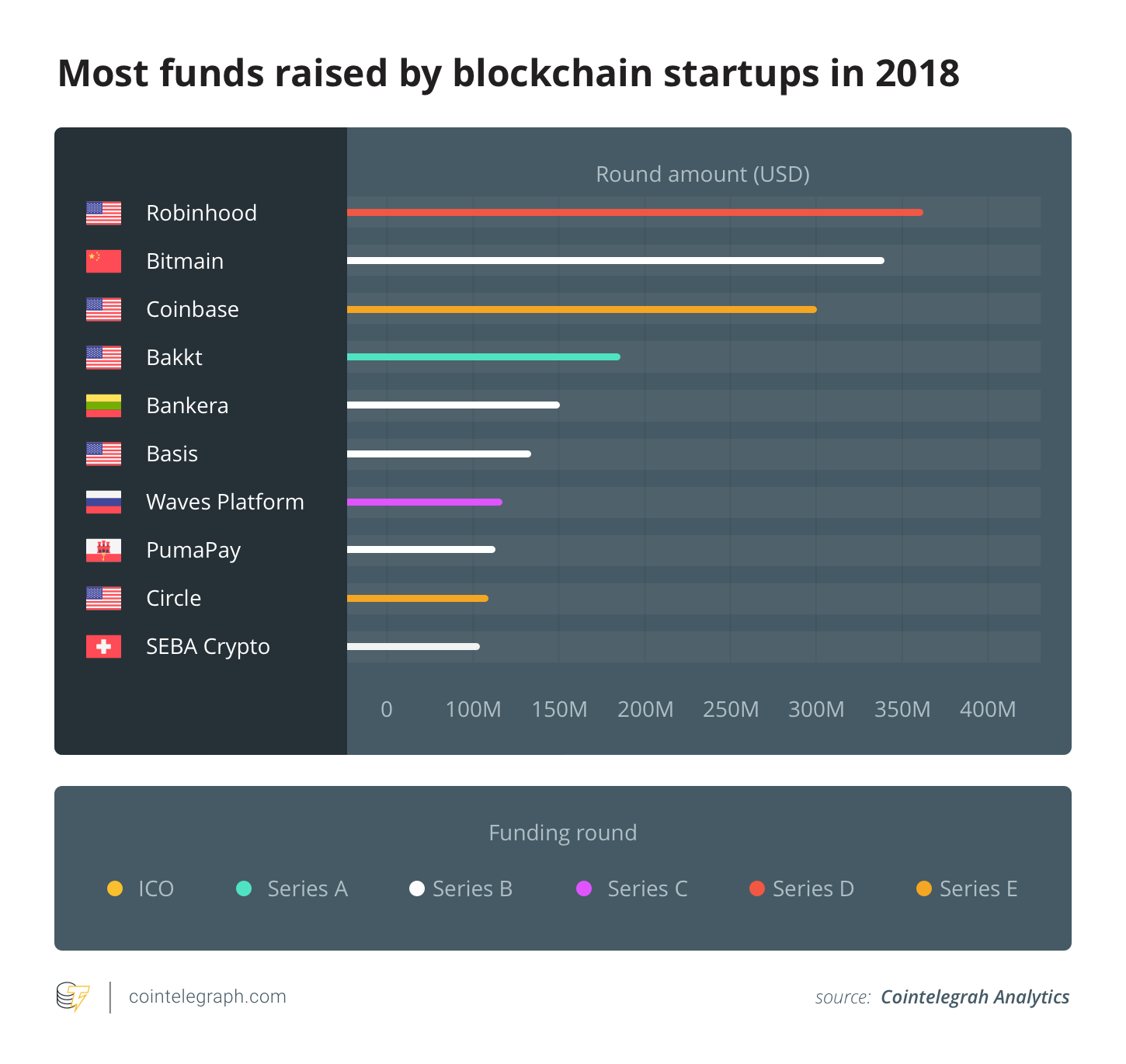 While 2017 marked the rise of cryptocurrencies, blockchain and ICOs, 2018 was the year of market corrections. The inflated crypto prices that reached an all-time high in January 2018 came crashing down — along with the hopes and dreams of many people who invested in crypto, believing it was a get-rich-quick scheme.

As the data suggests, there was a sharp decline in the number of ICOs for the top funded blockchain companies. Institutional investors started to be interested in funding, fueled by their fear-of-missing-out.

Robinhood and Coinbase continued their massive fundraising spree. Bitmain, a major producer of ASIC miners, also raised $340 million in a pre-IPO round, raising its valuation to over $12 billion. However, falling victim to the decreasing mining demand, the valuation fell sharply.

Funding of blockchain companies in 2019

Back in 2017, blockchain evangelists argued that ICOs would render traditional VCs a thing of the past, but an entirely different story has played out. For the promising potential ICOs had shown at one point in time, they effectively became obsolete.

However, VCs were still interested in the blockchain ecosystem, but mostly only advanced-stage funding rounds saw a large influx of funds coming in. Robinhood continued raising funds for a fourth consecutive year, this time clutching $323 million and a further $50 million in its Series E round. Figure, a leading fintech company in both home equity and the blockchain space, raised two rounds of funds that totalled close to $175 million. 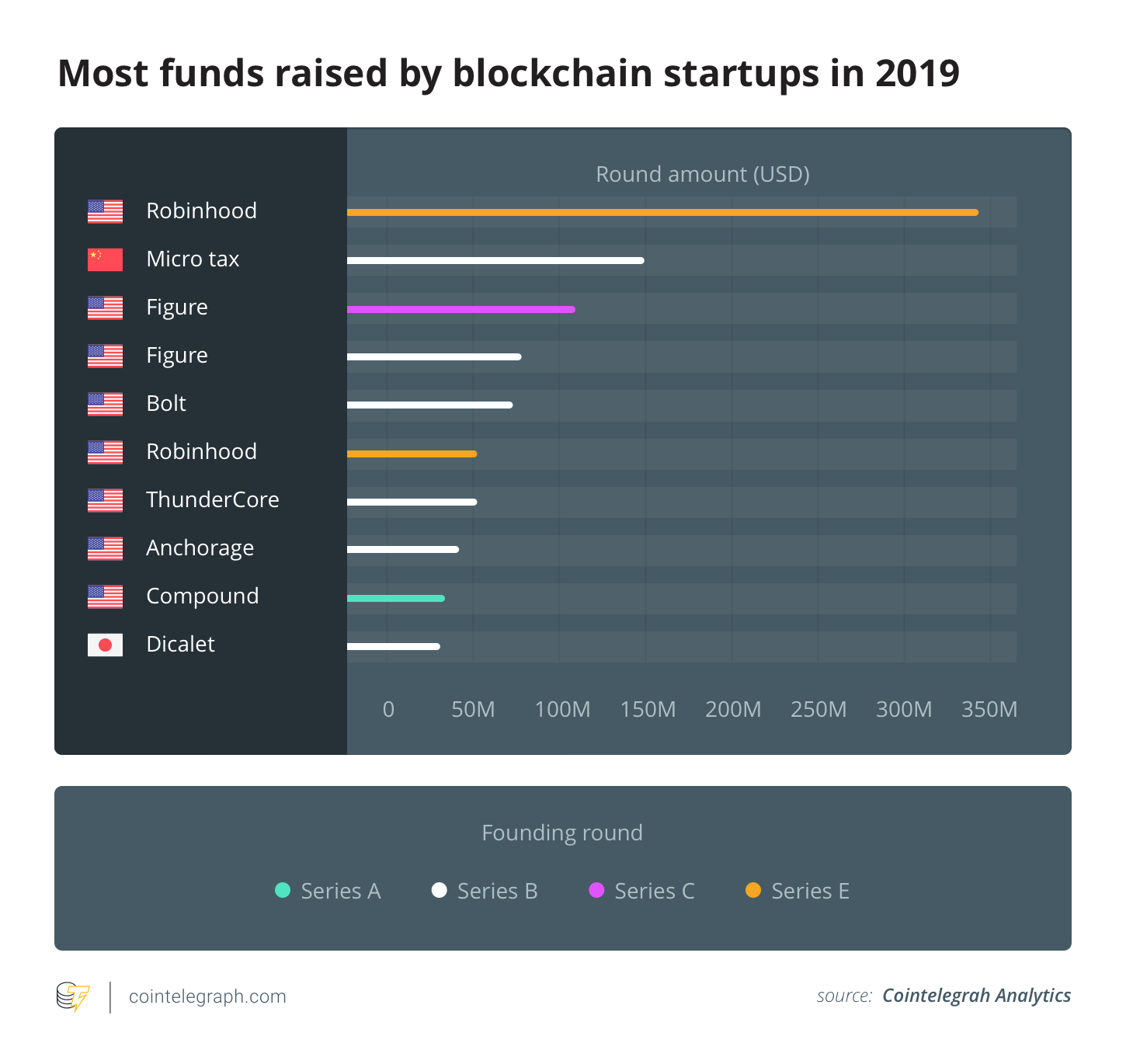 Speaking to Cointelegraph about the decline of funding compared to 2018, Sidharth Sogani, the CEO of Crebaco Global Inc., which offers credit ratings for exchanges, blockchains and coin offerings, attributed it the skeptical nature of the institutional investors when it comes to crypto. He said:

“As per our statistics, over 95% of blockchain or crypto projects failed. Most were scams and MLM/Affiliate marketing schemes and some of them didn’t know how to head a company, and because of lack of knowledge, they failed. More than 10.6 Billion US Dollars were lost from the 2018 Bull run till June 2019 which is a massive figure. That is the main reason why traditional institutional investment is reluctant in entering the space because they do not know how to assess this technology and understand the feasibility of the project.”

However, in many ways, 2019 was the year of enterprise-level blockchain, both in terms of adoption and funding. Even though fewer projects were getting funded, the deal structure is increasing in complexity by having more investors per deal. More money is being invested per project, indicating the maturity of blockchain investment market.

Blockchain funding coming from China has been a recent phenomenon as the technology penetrates the market. During the first six months in 2019, Chinese blockchain startups raised $368 million through 71 funding deals. However, even these numbers represent a drop of 67% in deal-to-dollar value compared to 2018.

Institutional investors have been bullish on blockchain startups for sometime now. In fact, Fidelity’s Global Institutional Investor survey found that 80% of investors think that blockchain and similar technologies will fundamentally change the industry by 2025.

According to reports obtained by Cointelegraph, Digital Currency Group tops the list with 95 blockchain-based portfolio companies such as Coinbase, Circle and Figure under it. Pantera Capital has 55 portfolio companies, while BlockchainCapital has 47. Other notable institutional investors in this domain are Blockchain R&I, Boost VC, NGC and 500 Startups.

IBM has invested more than $200 million in a blockchain-powered data-sharing solutions for the Internet of Things, and Google has reportedly been working with blockchains since 2016.

Related: Biggest Crypto Hedge Funds and What They Tell About the Market

The number of early stage backers had been high in the pre-2018 boom due to the massive returns from early investments in Bitcoin and Ethereum. Following the price decline and stabilization, these early investments did not transform to follow on-rounds. This indicates that while early stage funding is comparatively easy, many VCs are waiting for evidence of product–market fit and clearer signs of revenue before making further investments.

Evolving to reach a Series B grant is a hard business, and few firms can reach that stage. Challenges with learning curves in user experience and designing profitable business models make it difficult for startups in the ecosystem to evolve. Speaking to Cointelegraph, Raullen Chai, the CEO of IoTeX, a Silicon Valley-based IoT company said:

“We have transitioned into a phase in the industry where there is more emphasis on actually having customers use blockchain and blockchain-powered products, as opposed to startups focused on raising money. It is true that many companies that raised money have fallen by the wayside or failed or deliver much. But, at the same time, many have been heads-down working and have managed to use the raised money for creating products that get used and that stimulate blockchain adoption.”

Adoption still on the rise

In 2018, a Deloitte survey found that 95% of companies across various industries are investing in blockchain tech projects. In 2019, those projects are finally moving from the test stage to the end user. What was initially thought to be a tool to enhance the financial industry is finding application in cybersecurity, health care, agriculture, supply chain and more.

Enterprises no longer question whether blockchain is worth the attention. On the contrary, they are proactively seeking new ways of incorporating this technology in their legacy systems.

Blockchain players in the payments segment, such as Ripple, are increasingly partnering with non-bank payments providers, the businesses of which may be a better fit for blockchain technology.

Adoption of blockchain is bound to increase in 2020. For instance, gaming giants AMD has announced that it is joining the Blockchain Game Alliance. The gaming industry has always been a trailblazer when it comes to emerging technology adoption. Being an industry that attracts a lot of capital, it is clear that more money will be flowing into the blockchain sector.

Furthermore, a Gartner study has found that blockchain is estimated to generate $3.1 trillion in new business value by 2030. The same study emphasized that 2023 will be the tipping point in terms of mainstream adoption, as companies start to explore more realistic means of utilizing the technology. Sogani is optimistic that 2020 will be the year of blockchain. He said:

The ability to move blockchain from proof-of-concept to adoption has been less than what was anticipated by early blockchain evangelists. While the market is giving blockchain companies plenty of room to prove themselves, investors are also becoming more concerned about results.

Source: Amid Rising Adoption, Funding for Blockchain Startups Dries Up